See for yourself
All Talks Individuals Chapters
blog
Blog DC 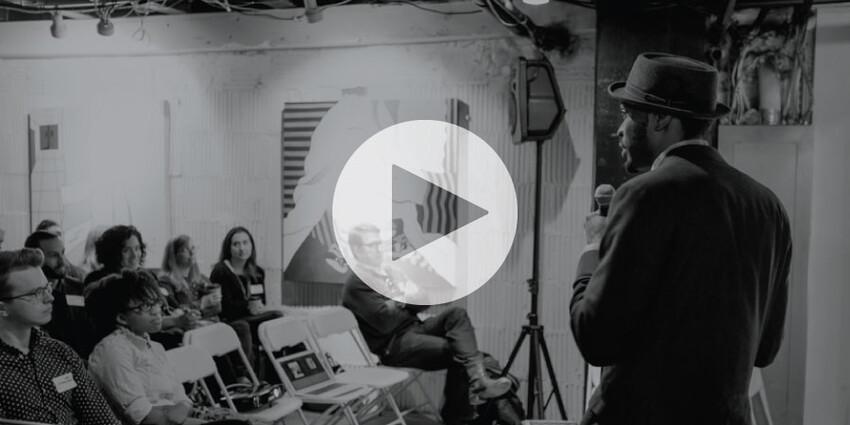 Photo above by Kate Warren.

We’re going to pray this distraction out of you. —Aniekan’s Parents

Aniekan Udofia’s parents told him this when they were living in Nigeria. The distraction they wanted to pray out of him was his drawing.

If you’ve ever had chili cheese fries at Ben’s Chili Bowl on U Street, then you’re familiar with Aniekan’s distraction. He’s a world-class muralist based out of DC. Down Ben’s alley is aerosol work so tight it looks painted. That’s Aniekan Udofia.

I had the pleasure of seeing him speak at my second-ever CreativeMornings/Washington, DC as part of April’s monthly theme, Rebel. DC’s chapter host Joel Daly asked Aniekan to speak on behalf of the District.

Aniekan is rebel for many reasons. As Joel introduced, he picked Mr. Udofia out for his famous work doing aerosol street art. Graffiti, through hip-hop, has its roots as defiance towards traditional expression. So, it seems a natural pick for “rebel.” I do have to admit, though, that when I heard they picked a Mr. Udofia (who up until that point I wasn’t familiar with his name) something in me sighed. My friend Fawna assured me that: “it’s Creative Mornings, it’s going to be good.” I relieved by how right she was.

Again, like with my last experience at CreativeMornings, I was taken completely off guard. Aniekan’s story is one of hard-work and humility. And it is in his honesty to himself that he’s a rebel to common notions of “the Artist.”

Since he was a child, Aniekan always had a pencil in hand, sketching away. In a picture from when he was boy, you see this anxious look on his face. You could tell he wanted nothing more than to get back to work. It was work that his parents didn’t value. It wasn’t that they didn’t respect him, as he reminded the audience, it was that they wanted him to pursue a profitable career like an engineer or doctor.

So, we he grew up, his parents thought: “Ok, playtime’s over. That drawing stuff, that’s what you did as a kid, now it’s time to focus on your career.” So that’s when he wound up in DC working at his first job. The audience, who’s with him with every slide, pause with him. The next slide, a shot of him at Burger King. Aniekan let out a smile and everyone laughed. He explained that he worked 3 jobs when he got to DC: Burger King and a Security Guard at first, and then CVS a little later. Instead of speaking of this time with resentment, Aniekan had a great sense of humor about it. He also praised the time as a security guard because it allowed him with a lot of downtime to draw. During this time, he never lost sight of his dream to be an artist.

On his few days off, Aniekan would make way to New York City. He described a Manhattan pretty much all of the younger audience couldn’t imagine: one without Google Maps. He’d go to the closest Newsstand, thumb through a Magazine, look for their address on Broadway, and then waltz into their office portfolio in hand.

He played it cool, he joked, though he had no idea what he was doing. After awhile, and Art Director sat him down and told him that he needed to schedule an appointment. “You live in New York, right?” one asked. “Uh, yeah! Of course,” he said, still playing it cool. “OK then, just call us up and schedule an appointment in the future.” Now Aniekan found himself arriving to NYC, calling their offices at a nearby payphone, and scheduling appointments in the afternoon at 2. He usually got in town at 8 in the morning.

After awhile of this charade, Aniekna got his debut in XXL magazine with a half page illustration. When a coworker at CVS he chided: “What are you doing here?! You’re famous!” Aniekan was on a high. After XXL, work started to roll in, he felt great. That was until a friend told him that he lacked style. His compositions hid in the details of the scenes. It made him wonder:

What is style? —Aniekan Udofia The next part of his talk was easily the most impressive part. He took us through his internal process. He showed us an early drawing of Eminem. “That’s doesn’t look like Eminem” he criticized himself. “That background, those effects, it’s to makeup that it doesn’t look like him.” Aniekan showed us drawings of Lauryn Hill set years apart. Each time he honed his craft. Honestly, I would been happy if I was even capable of the first iteration! But as we progressed, you could see what the ceaseless critic in himself was looking for. By the final image, the audience broke into applause. Aniekan’s progress, before and after.

Once he got his first break doing murals, and he saw that it was steady income, Aniekan was able to quit working his multiple jobs and focus on his passion. What I really took away from his talk was his earnest approach to his work, and authentic view of himself. I think creative individuals often get caught up struggling with their ambition. Too often, because of where we are now—whether it’s a coffee shop, clothing store, or CVS—we find it hard to press on to where we want to be. Worse yet, we let the ambition of our future let our talent grow stale without meaningful improvement. Aniekan is a reminder of the true dedication and hard-work it takes to make a fulfilling life out of your dreams to be an artist. For that he is a rebel. His parents still ask him when he’s going to school for engineering and he nods appreciatively going, “Yeah, soon, I’ll apply soon.” The day Mr. Udofia’s parents prayed away his drawing, his friends egged him on: “Come on! See if it worked! Draw something.” He whipped up a piece and his friends yelled, aghast: “Woah! You got better! Tell your parent’s to do more!”

I, too, hope his parents keep praying, so that he keeps drawing.