The importance of turning ideas into action

In a rare “open-to-the-public” appearance in Portland, Kevin Carroll shared an inspiring, playful + enlightening conversation to remind all of us that “purposeful” ACTION sprinkled with accountability + grit is the true catalyst needed to make BIG audacious ideas a reality. Kevin made a donation to the Imagination Foundation in honor of the attendees and shared information about the Imagination Foundation Chapters (pop-up learning spaces for youth that foster creativity, entrepreneurship and 21st century skills through Creative Play). You can start a chapter right here. 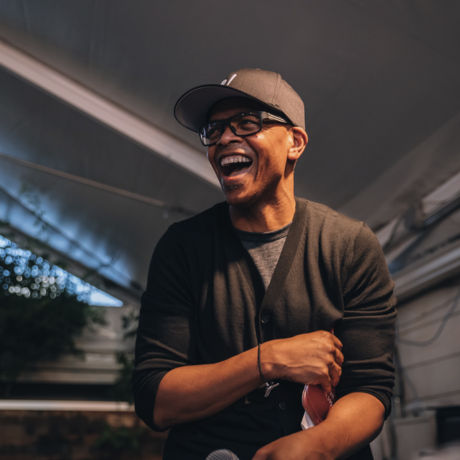 Kevin Carroll’s parents chose their addiction over raising three sons. The pinnacle moment of his parent’s neglect resulted in he and his brothers being “rescued” by a stranger, shuttled down to a bus station in Bowling Green, VA, placed on a bus alone (ages eight, six, and three) and sent on a 200+ mile, one-way fare to his grandparents’ house just outside Philadelphia. Without parents in his life, Kevin resorted to finding his life lessons from many sources: businessmen and laborers, winos and alcoholics, drug dealers and users, sport coaches, his peers and old-heads at the playground, merchants, war vets, school teachers, librarians, custodians, food service workers, other kid’s moms and dads. Kevin learned to be constantly on the lookout for any nugget of insight that would assist him on his quest to rise above his suffering and circumstances. He spent endless hours at the neighborhood playground, school, the public library and 754 Haverford Road (his surrogate family’s home). Those destinations proved to be catalytic locales in his journey from a hardscrabble upbringing filled with dysfunction, upheaval and uncertainty to becoming an author, a speaker and a global change agent.

Don't talk about it, be about it. — KEVIN CARROLL

Sometimes the answers are right there in front of you, but you have to be willing to be present. — KEVIN CARROLL

Hosted by The Armory