Nuno Coelho Design as a tool for collective memory

Embracing the voices of our past and present for our future.

Naima begins with song. Her presence, her bluesy tones, and open palms seals us in the moment as she speaks from her soul. Naima prefers to open this way. Song, she reminds us, allows for all voices have space. It reminds us of singing’s place in our history and roots, where it was born out of simple call and response. The interplay of song, though, the ways it garners trust and support, is not unlike our desires for support and leadership. It’s that support through community, Naima sees as worth strengthening. The same way harmony relies on multiple tones (embracing the dissonant at times), our voices and opinions are fundamental to community. By the end of the 1800s, a majority of the world was colonized by European nations. The violence of uprooted existing culture, engendered constructs of belonging and not belonging, others and the other, the haves and have nots. Today the work is on us, Naima challenges. Today community is tasked with understanding where we’ve been (since the beginning of time) as well as well as what we would like to be. Are you at risk by not looking the right way, speaking the right way, dressing, dancing or loving the right way? Our voices sing for America right now. Do you think it’s in harmony? 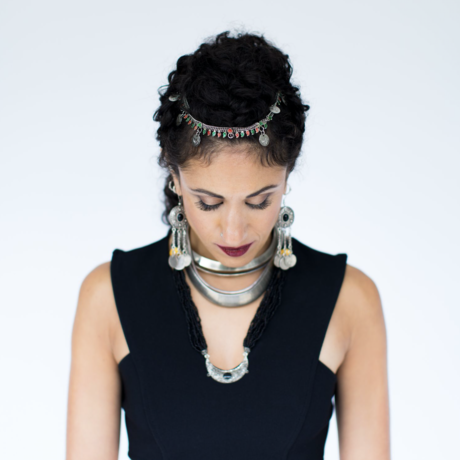 Naima Shalhoub is a Lebanese American artist who uses music as a tool for transformation, liberation, education and self-expression. Her dimensional work as a vocalist, composer, performing artist, and educator focuses on the expansive quality of the voice and its power for redemption and social justice.

After receiving her MA in Postcolonial and Cultural Anthropology in 2008, she turned her focus to creation and performance in the Bay Area. She immediately found herself equally at home with her band on the stages of San Francisco music venues and in the spotlight as a presenting speaker at TEDXLAU in Beirut. Her music brings vibrant personality, poetic eloquence and impassioned performances to both nationally acclaimed venues and community event spaces. She also appears in theater productions, joins fundraisers, and speaks at conferences across the United States.

In May of 2014, Naima combined her passion for music, social justice, and education by facilitating weekly “Music and Freedom” sessions with incarcerated women at the San Francisco County Jail. The program was such a success that, a year later, she recorded her debut album, Live in San Francisco County Jail, in front of an audience of those same incarcerated women, many of whom participated in the performance. The result is a recording that embodies Naima’s deeply held belief that music and song are vessels for freedom and healing.

In addition to appearing regularly with her band, Naima is currently teaching Voice and Music to middle schoolers at a public charter school in Richmond, California. As an educator, she draws on her recent experience as a Restorative Justice Coordinator for youth in the Oakland public school system. At the same time she continues to work on her project “Borderlands”: an expansion on her work in the San Francisco County Jail. Borderlands facilitates music sessions that are simultaneously expressive and educational, and ultimately connect with the larger movement of transformative justice on a local and an international scale.

We can’t have vibration and music without difference. Difference is beautiful. — Naima Shalhoub

What’s the song that we want to sing in our communities? — Naima Shalhoub

Voices that are on the outside—how can we bring them to the inside of our community cypher? — Naima Shalhoub

Hosted by Studio To Be