Questioning the Role of Ego in the Design Process

Omer Arbel showed a revealing series of short videos that exposed the process behind a project his team worked hard only to eventually fail.

For the August, 2012 edition of CreativeMornings/Vancouver, we were honoured to have renowned designer Omer Arbel as our speaker.

The founder of OAO and creative director at Bocci, Arbel showed a revealing series of short videos that exposed the process behind a project his team worked hard only to eventually fail, but along the way Arbel discovered aspects of the material’s properties that led to new methods he uses in his fabrication process today. Arbel’s talk was as poignant as it was to the point, with an impressive degree of honesty and humility for someone with his credentials, awards and international acclaim.

Arbel admitted that he often has no idea how to make something and seeks helps from others, crediting much of his success on collaboration with his team. He spoke about topics such ego’s role in the design process and the way materials like concrete are typically used, and engaged the audience in a compelling dialogue about inspiration, process, the definition of creativity, architects’ being hung up on form, and his pursuit of the best cantaloupe for making ice cream. The morning ended with IDSwest and Inform giving away one of Bocci’s gorgeous, Arbel-designed “28” chandeliers. 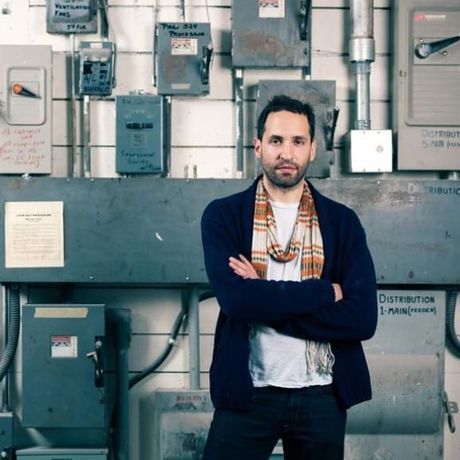 Omer Arbel, born in Jerusalem, is a Vancouver-based designer. He is the founder of OAO, an award winning design practice, and Creative Director of Bocci, an innovative manufacturer of industrial design objects, furniture, lighting, and building technologies. His diverse works include everything from the designs for the 2010 Winter Olympics medals to award-winning interiors for luxurious public and private spaces.

Arbel’s many projects also include the 23.2 house outside of Vancouver, bespoke lighting installations like the 28 chandelier, and the innovative yet accessibly priced electrical wall units of the 22 series. All of Arbel’s projects are numbered in the sequence in which they were designed, naturally creating a numeric catalog of his design history.

Often Arbel’s designs will feed off each other. A building commission might involve working with a new type of concrete, which in turn inspires a concept for a new type of chair. An example of this process is the 8.0 chair, part of a small collection of indoor/outdoor pieces developed in collaboration with concrete manufacturer Lafarge. The chair is made from a new, high strength concrete called ductal, which OAO applied for the first time outside a construction context. The extraordinary strength properties of Ductal allowed the chair to be extremely thin with a tenuous looking cantilever for the seat. The final design looks thrillingly ‘impossible.’

In other situations, a piece of design developed specifically for an architectural project will subsequently be put into production as part of a new Bocci range, such as the poetic 14 series chandelier, initially created for the 15.2 penthouse. The 14 is a reinvention of the idea of a chandelier in that it is ambient – the opposite of a traditional, central sculptural concept. The ‘ambient chandelier’ concept could only be born in the context of architectural space making.

To date, the majority of Arbel’s industrial designs are made by Bocci, the Vancouver-based manufacturer for which Arbel is also Creative Director. Unlike a traditional European manufacturing company, Bocci works as a loose affiliation or community of experts, craftsmen, suppliers and engineers that varies with each project. The Bocci approach to manufacturing allows an agile response to different briefs and supports the open-minded creative process that characterizes OAO’s designs.