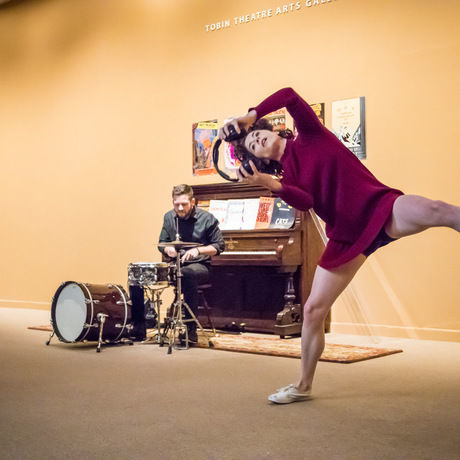 Felicia’s professional career started at 18, when she joined Ballet Austin 2. She then became a member of Dominic Walsh Dance Theater. She danced the lead role of ‘Juliet’ in Walsh’s production of “Romeo and Juliet,” and toured to Naples, Italy, where she performed on the private island of Li Galli. Felicia later joined Hubbard Street 2, where she was a part of many original creations and toured throughout the US and Germany. She began her freelance career in Chicago and has been featured in several companies since. Felicia is happy to be back in her hometown of San Antonio!

Brandon Guerra is a multi-instrumentalist from San Antonio, Texas, who holds a degree in Jazz Performance from Texas State University. He is currently the house drummer at the popular new jazz club, Jazz TX, located in the historic Pearl Brewery in San Antonio, TX. He can be found playing every week with a variety of musicians in the south Texas area, usually playing over 250 performances a year. Brandon has also recently been composing original music for dance companies around south Texas including: ARCOS Dance, Blipswitch, Ballet Conservatory of South Texas, and McBride Dance.