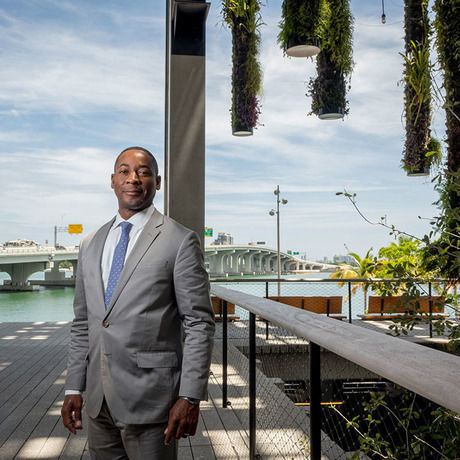 Franklin Sirmans is an American art critic, editor, writer, curator and has been the director of the Pérez Art Museum Miami (PAMM) since October 2015. His initiatives there include ensuring that PAMM’s art program reflects the community in Miami and securing donations. In his first six months at PAMM, he managed to secure the largest donation of works in the museum’s short history, over a hundred pieces of art were donated by Design District developer Craig Robins.

Prior to his appointment, he was the department head and curator of contemporary art at Los Angeles County Museum of Art from 2010 until fall 2015. He has curated annual exhibitions in Los Angeles, Atlanta, Milan, Montreal, and Munich, and is a David C. Driskell Prize Winner.

He is an amazing asset to the Miami creative community.

Art is simply a catalyst, it is simply the thing that we make up, then love and get seduced that leads us to something else, that leads us to another conversation. That leads us to a dialogue that can be used in a way that generates a higher degree of empathy, that allows for us to see each other in a more clear light and to understand each other better, and to hopefully live together better. Yes, we do have that aspiration. — Franklin Sirmans

"Craft" can be a derogatory remark - not making art, just doing craft. A healthy conversation again for artists that are considered to be self-taught, sometimes call them "folk" or "outliers" - as they make craft instead of art. — Franklin Sirmans

If we can't imagine it, we can't do it... If we cant imagine it then its definitely not going to happen. And artists allow us to imagine, allow us to dream." — Franklin Sirmans

We all believe that creativity, innovation, comes from thinking that is often generated from artists. — Franklin Sirmans