Looking to improve the way you work with clients, understand and question design briefs, deliver knockout presentations – and generally gain covetable creative confidence? Sometimes the solution is staring you in the face.

Michael Johnson is the writer, designer and thinker who founded world-renowned brand consultancy, Johnson Banks. He set up the company in 1992 after learning his trade in branding, design and art direction across the globe in Tokyo, Sydney, Melbourne and London.

Over two decades later Johnson Banks have rebranded Mozilla entirely in the open, launched a world-beating campaign raising billions for the University of Cambridge, and transformed the thought leaders of impact investment, Acumen. Michael received its lifetime achievement award in 2017, slightly ahead of schedule – begging the question ‘Now what?’. His first two books are “Problem Solved” (Phaidon Press 2012) and “Branding In Five and Half Steps” (Thames & Hudson 2016).

The initial thought for Michael’s third book, came in May 2017 whilst pacing backwards and forwards backstage at the TYPO Berlin design conference in Germany. Johnson was waiting to follow the penultimate speaker, Erik Kessels, who had an audience of normally straight-faced Germans in stitches of laughter with his collection of found images.

‘I wrote a mental note to myself there and then’ explains Johnson, ‘something along the lines of – never follow a Dutchman onstage who has been showing pictures of erect penises for 50 minutes.’ A few weeks later he began a long train journey remembering that note, and by the time he arrived he’d written almost 200.

In its final form, Now Try Something Weirder packs 233 hints, tips and ideas into a pocket-sized, easy-to-read handbook, written to help all types of creative – from student to graduate, from creative director to business owner. In his talk at CreativeMornings Berlin, Michael shared 2 dozen of those hints with the audience. As he says, ‘For three decades people have been asking me for my advice on how to have ideas, where the ideas come from, how I keep having them, and so on. They also ask about my life in the creative business, its ups, downs and pitfalls. I thought it was about time I wrote it all down.’ 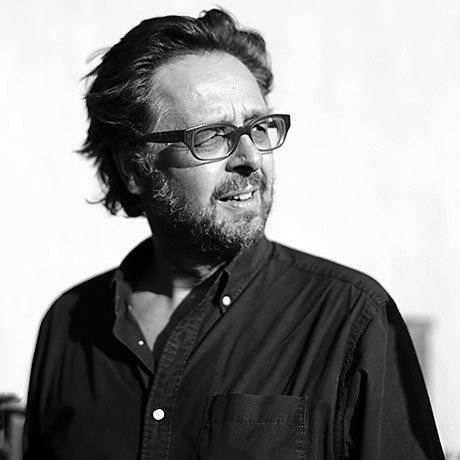 Michael Johnson has pretty much seen it all. He’s had nine jobs and has been fired from three of them, before starting Johnson Banks in London 25 years ago.

He now has clients across the globe. He has rebranded Mozilla entirely in the open, launched a world-beating campaign for the University of Cambridge, and transformed the thought leaders of impact investment, Acumen – whilst knocking out dozens of stamps and hundreds of posters at the same time.

Johnson has written a book on problem solving and lifted the lid on the branding process with his international bestseller, Branding: In Five and a Half Steps (Thames and Huson). His third book, Now Try Something Weirder (Laurence King) comes out in May 2019.

Over his career he has won most of the design world’s most desirable bits of wood and metal and in 2017 was awarded the Gold D&AD’s Presidents Award, joining a list of previous recipients that includes Sir Terence Conran, Ridley Scott, Alan Parker and Wally Olins.

In his spare moments he wields old-fashioned yet wonderful cameras, and wonders why, after 48 years of trying, he isn’t a better guitar player.

If you’re struggling, look at a problem from a different direction. — Michael Johnson

If you’ve stumbled on a big idea, it’s really important that you show where it could go. — Michael Johnson