Jo Wingate City of Sheffield, a muse for creativity 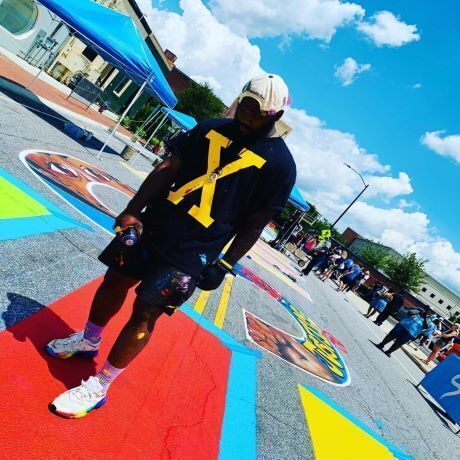 At 8:15 a.m. on Friday, September 11, join the Zoom Meeting by clicking HERE (the meeting password was emailed to the Guest List) or watch the livestream on YouTube by clicking HERE.

Born in New York City and raised in South Carolina, Forbes-featured artist Frankie Zombie has dove head first into what you could call a renaissance Art realm. With a focus of Contemporary Abstract Art forms, Frankie has tapped into the heart of interior design, thought-provoking Murals, Automotive design, fashionable apparel, philanthropy, Civil Rights and much more. Leading him to be able to create for some of the world’s beloved moguls such as Pharrell Williams, Miley Cyrus, Celine Dion, as well as networks like TNT, HBO, BET, and the NBA. However, before reaching these humbled heights, Frankie early in his art career moved to Los Angeles as a struggling yet optimistic Artist with dreams of inspiring the masses one day through his Art and childhood imaginations. Over the years while in LA Frankie began to find his creative grooves in the Art world, however it wouldn’t be until a trip back to his hometown of Spartanburg, SC where he would then find his true purpose in Life and Art. While visiting home he was given the news that his mother was diagnosed with stage 4 Breast cancer, which he then immediately made the transition to permanently move back to his hometown. Moving back home was not the best moment for Frankie Zombie as depression hit during the early transition of moving due to dealing with his mother’s diagnosis, and wondering what would come of his newfound Art Career in such a conservative atmosphere. But it wasn’t until he took a deeper look into his mother’s fight through cancer that made him realize that we ourselves have to be the direct change internally and externally. His true art forms were then birthed, one being his “Diary Style” that is a heavy form of expression through text, touching on topics such as spirituality, racism, politics, mental, physical, and emotional health, and several other topics that provoke healthy conversation and understanding amongst people. While on a mission to spread his voice creatively in his community over the next 2 years, Frankie’s messages and morals began to be heavily welcomed by his city leading him to acknowledgements such as “40 Under 40” Awards and Business Entrepreneurship. While awards are great, Frankie Zombie’s love for culture, equality, respect, and Freedom took a forefront as he in the Year 2020 participated in a creative Civil Rights Movement as he helped create Charlotte, North Carolina’s “Black Lives Matter” Mural and later organizing his own 16 Artist “Black Lives Matter” Mural in his hometown. As Frankie’s Art continues to travel to new heights from America to Ibiza, Italy, Canada and many other great places of the world, his message will always shout that of happiness, persistence, and change as it will forever start within.

Hosted by The September Zoom Room