Crafting Stories, With and Without Happy Endings 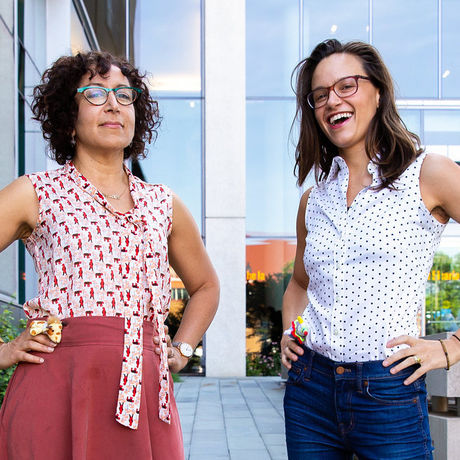 Hanna Rosin is the co-host of Invisibilia. She joined in the second season and won a Gracie Award for a story about men on an oil rig learning to cry. She came to NPR from print, most recently as a national correspondent for The Atlantic, where she wrote cover stories about various corners of American culture. She has been on the Daily Show and the Colbert Show and headlined the first women’s TED conference. She was part of a team at New York Magazine that won a National Magazine Award for a series of stories on circumcision. Hanna also hosts the DoubleX Gabfest, Slate’s podcast about women, and is the author of two books, including the End of Men. Everyone who currently works on Invisibilia is a woman. Coincidence?

Abby Wendle is a producer for NPR’s Invisibilia. She’s been a farm reporter in rural Illinois and helped launch This Land Radio in Oklahoma. Her work has been featured on NPR News, the BBC, CBC, and ABC in Australia and has received awards from The Missouri Review and The Third Coast International Audio Festival. Perhaps her biggest honor was getting Best Sports Report from PRNDI for a story about competitive corn husking. Abby competed the following year – snapping off and shucking 216 ears in 20 minutes. Here’s proof. In addition to making radio with the fabulous Invisibilia crew, Abby enjoys spending time with her cats and making weird art. She hopes to do more gardening and welding in the future.

You have to be tuned in, in moments of the interview, where you're facing severe creative resistance. . . . That's when the story gets great. — Hanna Rosin & Abby Wendle

Journalists are the bird researchers and the public are tiny little wild birds floating around in the universe, completely unaware. — Hanna Rosin & Abby Wendle