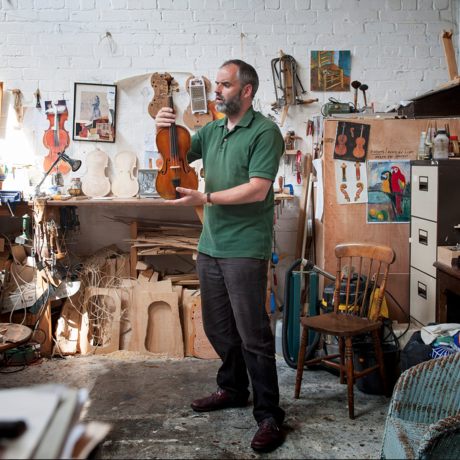 What could be more fitting for the monthly theme of “Craft” than hearing from a self-taught violin maker and player: Introducing Steve Burnett, Maker of the critically acclaimed Sherlock, Wilfred Owen and Siegfried Sassoon violins.   Steve’s role as an environmentalist,sculptor of wood and sound is to make violins ,to give Trees( The lungs of the Earth) An important voice for our fragile Environment ,in turn helping promote Harmony,Respect and Peace . The most recent violin made and launched on this World Ocean’s Day 8/6/18 through the National Media is the “ IL Mare Driftwood Violin”, made by Steve from a Driftwood log he found on an East Lothian beach two years ago and endorsed by The Marine Conservation Society as A voice from, and for the sea!

Steve will be joined by his musician/composer friend  and fellow environmentalist  colleague ,Thoren Ferguson ,to also talk about their collaboration in recent projects for Peace and Ocean protection with two unique violin’s which Thoren will play.

It's up to us to turn the tide and bring back the health of the planet so that our future generations can live in a peaceful, beautiful environment. — Steve Burnett

Environmental protection and respect for others all starts on your own doorstep. — Steve Burnett

Where music takes over, where words finish. — Steve Burnett

I could just sense as a stone sculptor can sense that there is a statue within a bit of sandstone, I could sense there was a violin sitting in that log. — Steve Burnett

As a player in the highland tradition he feels that instruments pass energy from the tree that they have picked up from the historic moments when these individuals were around them. That kinetic energy travels through the makers into the wood and then finally is released through the player who picks up energy and is able to hear and understand tunes from that in folk tradition, in that piece of wood. — Steve Burnett

Hosted by The Assembly Roxy